Give me some f*cking credit; should petty creative thieves be punished?

When does inspiration become outright theft? Why do some people think it's ok to spin your idea as their own? This month Amy Kean examines advertising's fine line between inspiration and appropriation.

Social experiments are an excellent source of awkward insight.

Playing mind games with human lab rats is perfect for storytelling purposes, which is why advertisers love ‘em. A brand of chewing gum once staged a social experiment asking subjects to pick which identical twin was cooler: the one chewing gum, or the one not chewing gum (you can guess the results).

I sometimes feel like a human lab rat when I work on pitches. The 24-hour turnaround brief is a social experiment: too many cooks sitting in stuffy rooms eating sugary crap, debating whether just-OK or slightly-better-than-average will suffice. A data expert sits in the corner and repeats what can be done with magical, barely-tested tools. At the 23rd hour, Big Boss arrives telling you to scrap everything, finishing the brief himself using an idea he had in 1997. 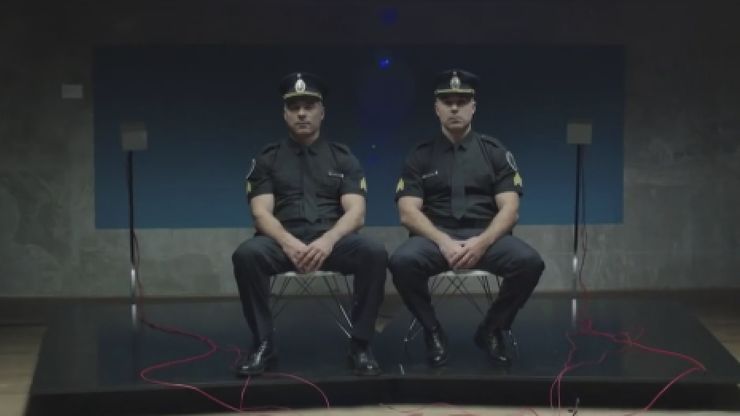 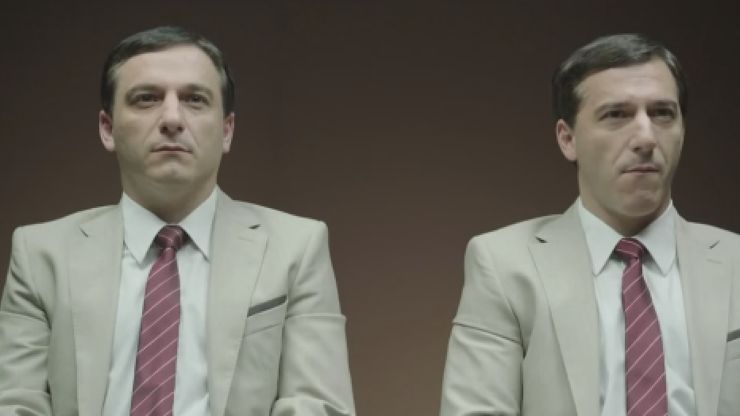 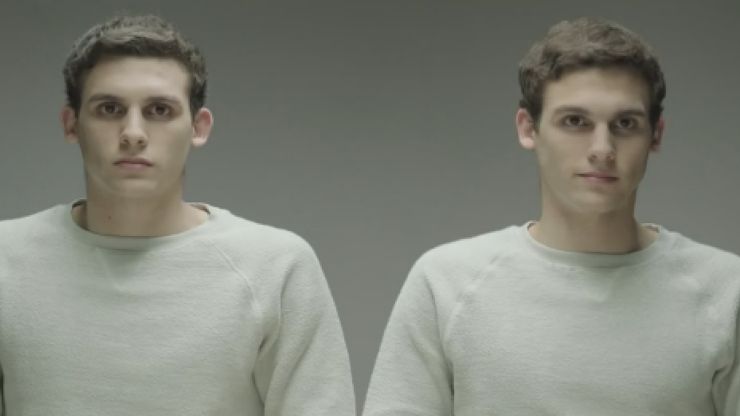 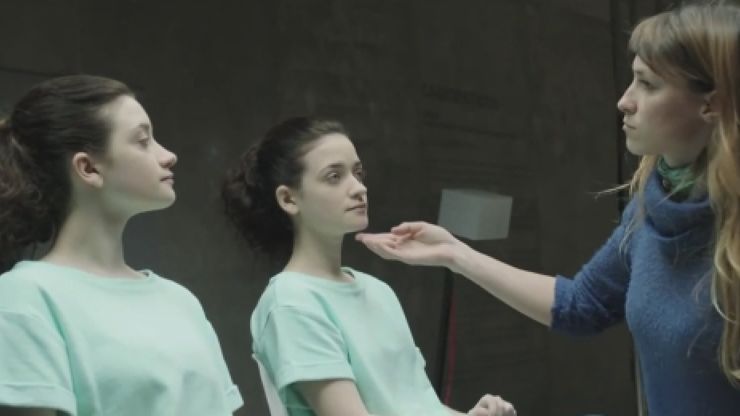 I was once on the pitch team for a fast casual dining brand. In the chemistry session we excitedly sketched out our campaign idea based on disrupting lunch habits, quoting complicated research my agency had spent a decent sum of money conducting. Unfortunately, there was no chemistry. The client said “no no no this brief is about discovery, not habit” and, as the strategist (like every strategist), I was deeply infuriated that my unique and powerful thoughts had been snubbed.

Weird then, when six months later the fast casual dining brand’s TV ad was almost verbatim our chemistry session script, including - the audacity! - some of the stats from our research. Don’t feel bad for me. When I saw our idea dancing across the screen I felt vindicated. Again, like every strategist, my obsession with being right will trump most other forces at play. Plus, I ain’t special. Petty creative theft happens to everybody.

Imitation in tech, media and marketing isn’t just sincere flattery, it’s the done thing. Instagram launched Reels this month, which mimics TikTok in the way Instagram Stories mimicked Snapchat’s stories. In our world, copying formats is fair game, but in a landmark act of punchiness, TikTok publicly bit back. Even the normally cool, calm and collected Evian cheekily accused Coors Light of half-inching their elegant design following the beer brand’s refresh. I won’t bother detailing the extensive Twitter debate because I value your time, but let’s just say PEOPLE CARED. 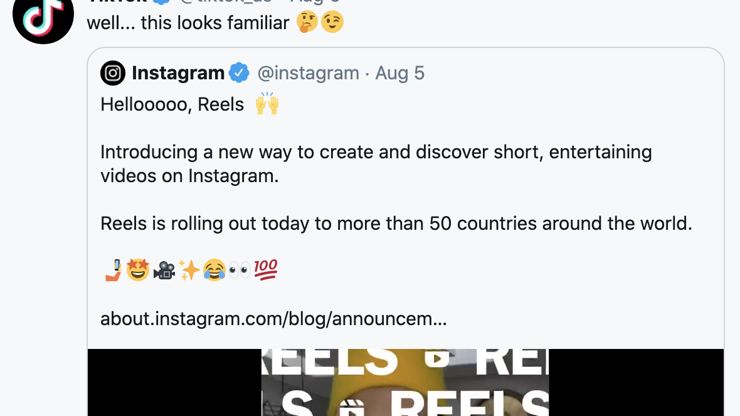 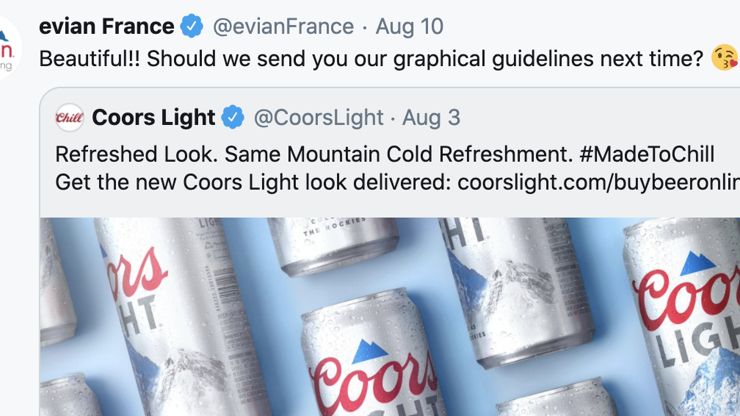 Above: TikTok and Evian took to social media when they felt their ideas had been copied.

It’s hard to feel sorry for global corporations, but creatives all over the world were triggered in June when a young creative called Pavlina accused an agency of rejecting her ideas for a brand of organic period products and then, a few months later, using them in a campaign for a brand of organic period products. According to the agency’s official statement it wasn’t daylight robbery, rather another creative who worked there had a near-identical idea. Dubious. Messy.

Stealing ideas, stealing credit, has become normalised in an industry where our ideas are the things that differentiate us.

A couple of weeks ago I had a huge chunk of my own work mansplained back to me when a guy claimed my proprietary thoughts and phrases as his. Proper Twilight Zone stuff. I wondered if he even knew he was doing it. I asked Twitter if there’s a name for the kind of person who hears an idea, and then immediately pretends it was their idea, until they inevitably become convinced that it was, in fact, their idea. (Popular responses were “a man”, “a creative director” and “a client”).

In my mentions, I read stories of women whose co-workers had unapologetically taken the credit for years’ worth of work; of the dirty tactics that saw capable creatives sidelined in the midst of office politics. And the pitches. So… many… pitches… where ideas had been stolen.  Stolen, as if that’s an OK thing to do. It’s not an OK thing to do, but a social experiment from 2013 called Primed to Cheat: Stealing Your Co-Worker's Idea to Stay in Business, by Benedikt Link, explains why it happens at work.

In the study, participants were primed with either words of competition, or words of collaboration before being asked to take a test. In the test, they were told to make decisions in a hypothetical scenario in which they could steal and take credit for a co-worker's idea to improve their own position. Those primed using competitive language simply did not see idea theft as a moral issue. So, the more competitive the environment, the less ethics are considered.

*Looks around at adland.* *Suddenly everything falls into place.* 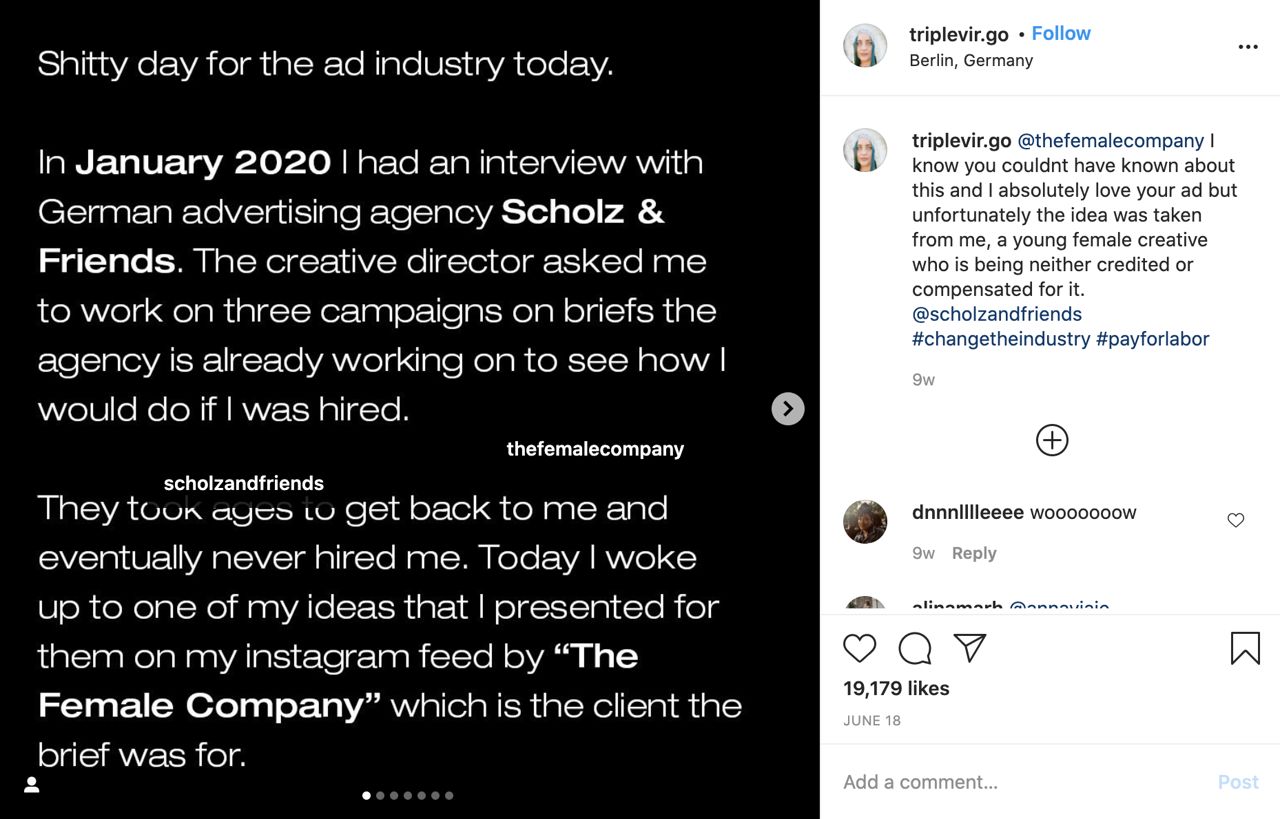 Above: A creative called Pavlina called out an agency in a series of Instagram posts when they used work she'd created in an interview process for a client's campaign, despite never hiring her.

An agency can deal with a few lost concepts. What about the freelancers who suffer this all the time?

Disregard for people’s IP is one of the reasons our sector has such a bad name amongst the people who actually work within it. Few feel empowered to call these crimes out. If I’d spoken about the fast casual dining brand whilst I was still at the agency, I definitely would have been fired. But an agency can deal with a few lost concepts. What about the freelancers who suffer this all the time? What Pavlina did - naming an agency she believed had wronged her - was brave. Not many freelancers would dare, for fear of having to wrangle a massive business in court.

A union could be an interesting experiment in our social ecosystem, a way to redistribute some of the power, perhaps.

London-based strategist Thom Binding has proposed establishing an adland union that would protect individuals with legal advice and representation in this kind of case. Like when their hard work has been taken without credit, and they can’t afford to defend themselves (it would also provide a counter to unhelpful HR departments who have been hiding harassment cases for decades). A union could be an interesting experiment in our social ecosystem, a way to redistribute some of the power, perhaps.

Social media is filled with creatives giving each other self-preservation advice. How to get paid on time. How not to be fucked over, or red taped into submission. How to “take it as a compliment” if a company lifts your thoughts without acknowledgment or even a note to say “sorry, Pavlina, we’re running a campaign similar to the one you proposed. Oops”.

Just because we’re socially and psychologically inclined to steal, doesn’t mean it must be done

Here’s a social experiment: try treating people with some fucking respect. Pay them for their ideas. Pay them to pick their brains. Hell, while we’re at it, pay them to speak at events. Pay them! Thoughts have value. Just because we’re socially and psychologically inclined to steal, doesn’t mean it must be done. Maybe we need a union, or maybe we need to up our decency levels. Maybe we can do both. Maybe we can A/B test it using a magical barely-tested tool. Even if we considered giving fairness a bash occasionally, grabbed some integrity and gave credit where it’s due, the results might just work for everyone.