Social media is breaking us; why we need something radical to save ourselves

I’m not allowed to drive. When I was 19-years-old, at university in Bath, with its long winding roads and almost-vertical hills, I tried to learn.

On a wet October evening behind the wheel on one such winding hill, I came the closest I’ve been to death; a second away from crashing headfirst into an oncoming police car, after deciding way too late to overtake a tractor (that it was a police car was just bad luck; I wasn’t on the run or anything).

She made me pull over, get into the passenger seat and confirm that under no circumstances would I contact her again.

The car flashed its lights, I swerved, my instructor screamed. She made me pull over, get into the passenger seat and confirm that under no circumstances would I contact her again. She also said that because of my ‘girl racer’ attitude, I should never drive again.

Above: Free and unrestricted access to social media has had serious effects on users, especially the young.

I haven’t driven since. Apart from on fairground dodgems, and even that feels risky. Because, with my girl racer attitude and lackadaisical approach to speeding vehicles, I know I am too much of a threat to humanity to bear responsibility on our roads. You need a license to drive a car, because driving a car puts people’s lives at risk. You need a license to own a gun for the same reason. A license to sell alcohol. To get married. All contracts for which there is a non-negotiable (paid) declaration compelling the signatory to behave in the best interests of the individual and society.

For the last two decades, from the age of 13, every one of us has had free, easy access to the darkest sides of strangers.

Yet, for the last two decades, from the age of 13 [Twitter's age restriction for usage], every one of us has had free, easy access to the darkest sides of strangers. To widespread destructive behaviours and platforms proven to cause depression. There are no entry requirements, not even a preliminary hazard test before logging on. All you need is an internet connection and a keyboard.

These last few weeks I’ve looked at social media with new eyes. Before you start taking what I say too literally (like the worst social media users), obviously my actual eyes are the same. I haven’t had surgery. I haven’t stolen anyone else’s eyes. Jesus! I mean, my social media experience has formed jagged edges. The rose tint’s vanished, sliding out from my DMs and into the nether. My tipping point? Candy Crush. They’re launching a new tournament: Candy Crush All Stars. Apparently, the search is on to find the UK’s best crusher. You heard me. It’s like the 2012 Olympics all over again, but with more at stake.

Above: Donald Trump's frequent online insults have built up tolerance to disgusting things.

Candy Crush has been going hard on Twitter with Promoted Videos featuring Alesha Dixon and Rachel Riley. The ads themselves are awful; like an acid trip at a 10-year-old's birthday party (now that’s a story for another day). They’re effective nonetheless, because at least I know Candy Crush has launched a tournament called Candy Crush All Stars.

A voyeur of the highest order, I’ve been clicking on the responses to these ads in my Twitter feed. As you’d expect, there’s an extensive combination of pervert announcements “I HAVE A CRUSH ON YOU” and “LET ME CRUSH YOUR CANDY”, nasty comments and racist slurs alongside guys called Simon claiming to be Candy Crush addicts. Candy Crush? Car Crash, more like. As a case study for the grubby, pointless, neon future no one wanted, it’s spot on.

Years of [Kanye] West’s old pal Donald Trump hurling insults at… everyone… has built up our tolerance to disgusting things.

Imagine being a marketer at the beginning of your career, thinking: you know what I’d love, when I’m lucky enough to run my own campaigns? A sleazy dude called Darren with an eagle avatar and a chronic misunderstanding of the Black Lives Matters movement who makes anyone spending time with my ad need a shower afterwards.

Talking of showers, my social awakening continued when I hopped onto Twitter the other day to find a video of Kanye West pissing on a Grammy (it’s widely believed his bursts of activity on Twitter are manic bipolar episodes). Years of West’s old pal Donald Trump hurling insults at… everyone… has built up our tolerance to disgusting things. It’s trickled down. 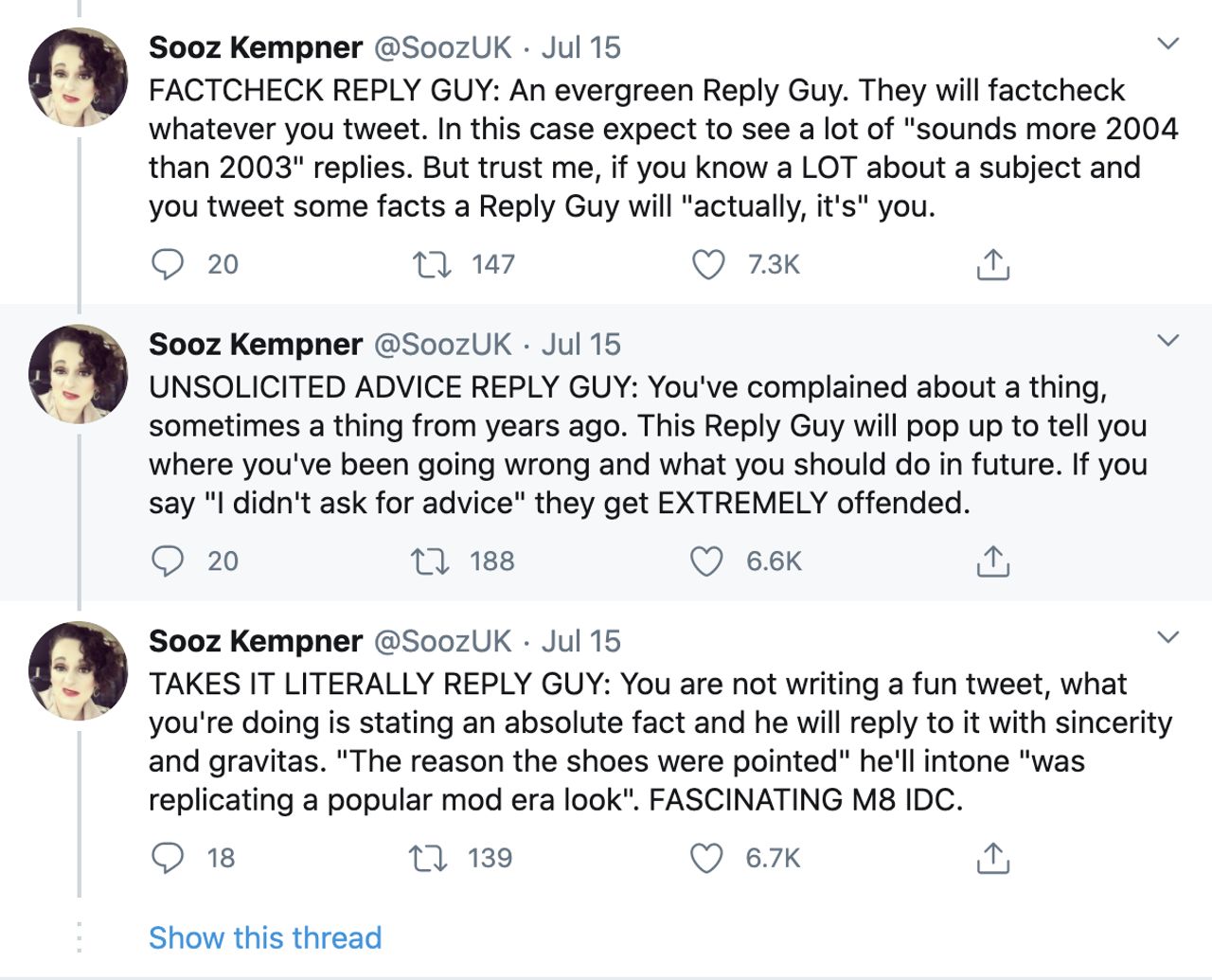 Above: Some of comedian Sooz Kempner's 'Reply Guy' types.

You must have seen it. People, everywhere, complaining about other people being mean on social media. Personally, I’ve felt a noticeable increase in men I hardly know picking fights with me on Twitter, using the “bUt YoU’rE oN a PuBlIc PlAtFoRm So I cAn SaY wHaT I WaNt” retort. These ‘reply guys’ were profiled excellently by comedian Sooz Kempner, who detailed the many ways in which they make social media an unpleasant place. If you saw a woman on her own on the train being hounded by a bored, greasy douche you’d probably protect her. On social media, we watch.

If you saw a woman on her own on the train being hounded by a bored, greasy douche you’d probably protect her. On social media, we watch.

How has this happened? There’s a theory in criminology called ‘differential association’, which is a good way to understand rule-breaking subcultures, and even cults. It describes how deviant behaviour within social groups is learned when it’s normalised. In short: we do bad stuff because we see other people do bad stuff, and they get away with it, so we think it’s ok. This isn’t about trolling, it’s about the normalisation of abuse.

It gets nastier. My nieces recently told me about a suicide video being shared on TikTok that was originally live-streamed on Facebook. In the news last week was the pre-inquest regarding the suicide of Molly Russell. According to reports, lawyers and police were unable to spend too long looking at the content Molly had exposed herself to on Instagram - which included images of self-harm - because it was too traumatic.

Lawyers and police were unable to spend too long looking at the content Molly [Russell] had exposed herself to on Instagram because it was too traumatic.

UK teenagers are some of the most depressed in the world and, according to the Office for National Statistics, our suicide rates have almost doubled in the last eight years. Many senior figures like Dame Sally Davies, the Chief Medical officer for England, have actively declared that social platforms are playing a huge role, and that they have a duty of care. The court at Molly’s pre-inquest heard how Snapchat, WhatsApp, Pinterest, Facebook and Twitter had been approached for their cooperation in the case although, until recently, only Pinterest had cooperated as requested.

Above: A trailer for Netflix's 'truth bomb', The Social Dilemma.

Anyone who’s seen the latest Netflix truth bomb, The Social Dilemma, will be aware that manipulation now sits at the centre of everything we do. Platforms are no longer tools, they’re puppeteers. The behaviour of any ‘user’ of social media is predestined, programmed via a process of positive reinforcement. But, right now, I’m not even talking about the evils of Silicon Valley, I’m talking about us. Humans have always been irresponsible. In the 1700s Immanuel Kant talked of the ‘social unsociability of man’. Of how, due to our “folly, childish vanity… malice and destructiveness”, we ruin everything we make. We create our own happiness, and then cause our own sadness. It’s human nature.

That we break things is nothing new. Kant was chatting about it in the 18th century, but surely now we have the capacity for self-awareness? For remedy? Social media isn’t just ‘websites’, it’s the social unsociability of man. The best of man, and the worst. Social media causes accidents and, despite making a lot of people a lot of money, social media can kill. Because the best and worst of us are there.

And, so, to the fix. I believe that social media needs a license. To be treated like the heavy machinery it is, capable of brain damage and destroying lives. We need a compulsory psychological test that people must pass in order to be trusted with the minds of others in the social world. Do we need saving from ourselves? Yes. But we always did. This isn’t about regulating usage (the platforms and policymakers can worry about that), but for as long as brands spend money on the likes of Facebook, Twitter and Instagram, profit will be prioritised over wellbeing. This is about regulating entry.

Would you give your car keys to a 13-year-old? Or an angry, racist, sexist, red-faced Tommy Robinson fanboy you’d never met?

Using social media is as dangerous as driving a car. Of course, it can be lovely, like driving can be lovely. Top down, the wind in your hair, UB40 blaring on the stereo as you pelt down an A road. Driving gets you from A to B. But would you give your car keys to a 13-year-old? Or an angry, racist, sexist, red-faced Tommy Robinson fanboy you’d never met? No. You’d need to be reassured they were responsible. Social media needs a license. And unlike that hill in Bath, where I sped head-first into the flashing blue lights of Her Majesty’s service and narrowly avoided death, this will be the hill I die on.