Bringing the block (and Black businesses) to real-life

Working on television sets, Andrew Sloane gets a new problem hand-delivered every hour, but creating an immersive, site-specific, multi-shot set that also supported local businesses in the Inglewood neighborhood of LA was a challenge on a whole new scale.

Issa Rae’s comedy show, Insecure, takes place in South LA, but sets are all over the city.

The most impressive this season was the full build on Market Street, in Inglewood. The art director for the show, Andrew Sloane, and the entire production team worked tirelessly for almost three months to create the experience on screen. The reasons this set was so immersive and successful was because instead of using satirized brands, nonprofits, or artists, the production had decided early on that the companies featured on-screen would be representative of the city, meaning they had to be the real deal.

“The fact that this show aired at the same moment when people were waking up to the generational struggle of Black folks and people of color...speaks to just how special this experience was.”

Andrew recalls that the Block Party had been around in-fiction for a while. There were prelim scripts that firmly established that Rae’s character wanted to do something to uplift the city and support Black excellence in LA. Faking that, he says, would have been disingenuous to both the Black businesses in the area--whose work they would be profiting from if they just pretended it was a different name--and the ethos of the show itself.

He was brought onto the show early - about 6 weeks prior to principle photography. Andrew knew even before the season started that set production was going to be huge, and feature local minority-owned businesses. The whole thing took over two months to build out. “Basically,” he says, “It was part event design and part art direction. The sets were a means of bringing the block into the real-world, and we had to do right by everyone involved.”

Andrew was actually pulled off Silicon Valley to help with Insecure, right after the massive, permanent build of his Googleplex “Pied Piper Offices.” Insecure was a younger, fresher show, full of a DIY attitude and open to new ideas. The mission of the show was to be inclusive, and there was really nobody standing in between the ethics of that and the execution of the massive, meta-environment of the Block Party.

I was trying to make people feel special, but when I’m touring the set, looking at the big picture and folks are pointing out things like ‘the spoke on the wheel of this coffee cart doesn’t look great,’ it becomes a challenge.

When asked about the kind of collaboration required to transport real businesses, employees, and artists onto set, Andrew just laughs. “It was, in a word,” he recalls, “never-ending.” In between taking direction from lead designer, Kay Lee, Andrew also worked alongside set decorator Amber Haley to determine the direction and the assistant art director Kirby Fagan to make sure that the massive production spreadsheet stayed up to date. 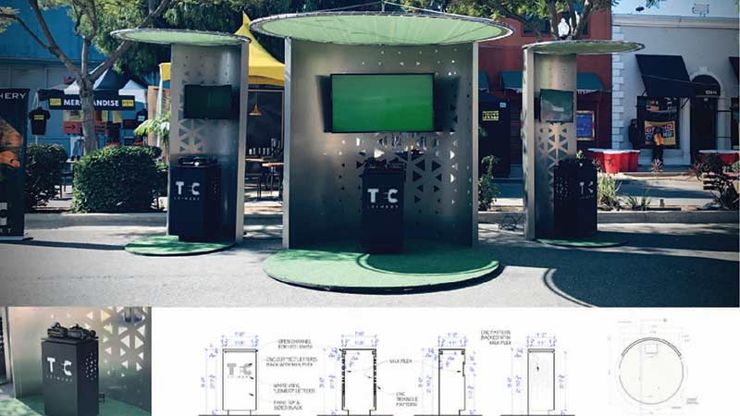 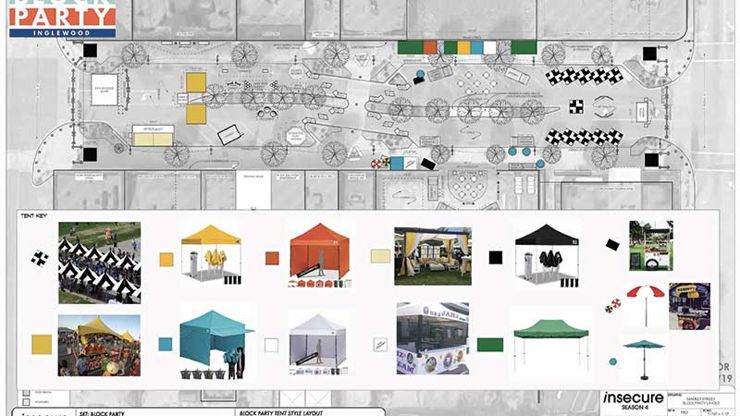 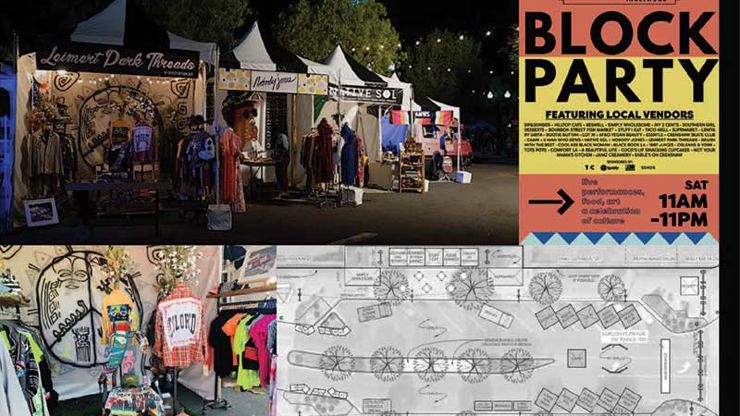 “The collaborative nature of filmmaking is the most fulfilling part of my job as an artist and creative person,” Andrew says, “this project was the result of many years of developing immersive, integrative sets.” His job was an exercise in creative execution. There was a plethora of delicate negotiations between HBO and the neighborhood itself. It was important to retain the integrity of both the neighborhood and the show.

This was a huge moment. For HBO, the party line is that unless it's a dire circumstance, the sets remain separate from the surroundings. Throwing that policy out the window meant that instead of Andrew replicating the aesthetic of a brand, he had to give input, allowing them to be on set, on site, as extras. It was a balancing act. “I was trying to make people feel special, but when I’m touring the set, looking at the big picture and folks are pointing out things like ‘the spoke on the wheel of this coffee cart doesn’t look great,’ it becomes a challenge.” He laughs, and insists he enjoyed it.

The mission of [Insecure] was to be inclusive, and there was really nobody standing in between the ethics of that and the execution of the massive, meta-environment of the Block Party.

It was tricky working with the real-life brands, he recalls, because the contributors had to agree to keep involvement on the down-low, even though some brands were visible in the pre-release publicity. After the show aired, many companies posted about their experience, tagging in Insecure, HBO, and Issa Rae, and most saw a marked uptick in engagement. “For companies like TEC Leimert and Sip & Sonder, we were able to elevate their aesthetic, giving them a chance to help create their own booths,” Andrew explains, “they were able to take those materials back to the company to use again. Usually, the sets go back to a warehouse somewhere!”

Andrew lights up. He explains that for two months, he, Kay, and Amber worked with HBO marketing directly to produce a digital zine that specifically highlighted the artists, makers, vendors, and brands featured on Insecure. “It took 73 emails,” he says, delighted about it, “there was so much back and forth - but it’s released and shows everything. It’s a huge elevation for these brands. We’re seeing these minority businesses really just beginning to harvest the fruits of all that hard work.”

We cannot work just for ourselves anymore. It must be with the intention to help better our world

As an art director, Andrew wants to make his job more meaningful, more considerate of change and the artists around him. He can’t imagine what his life would be like if he had the exposure some of these young brands received from the show when he was starting out as a young illustrator. 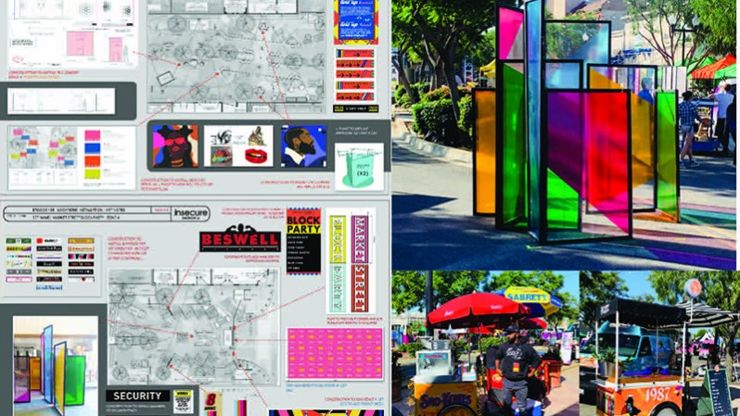 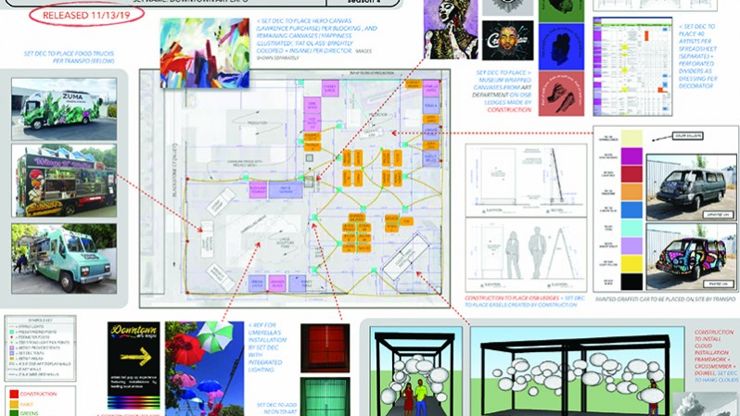 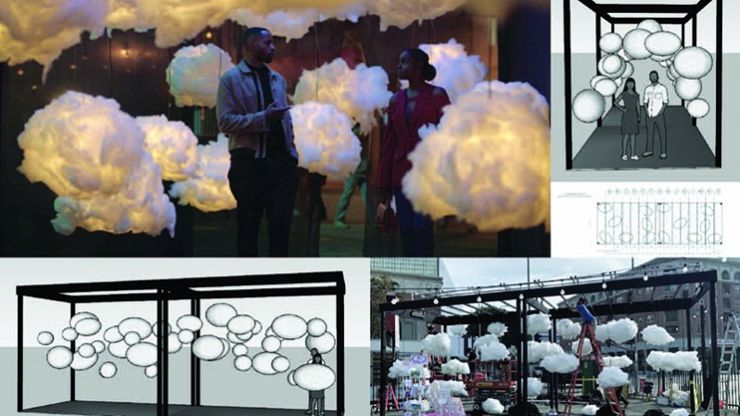 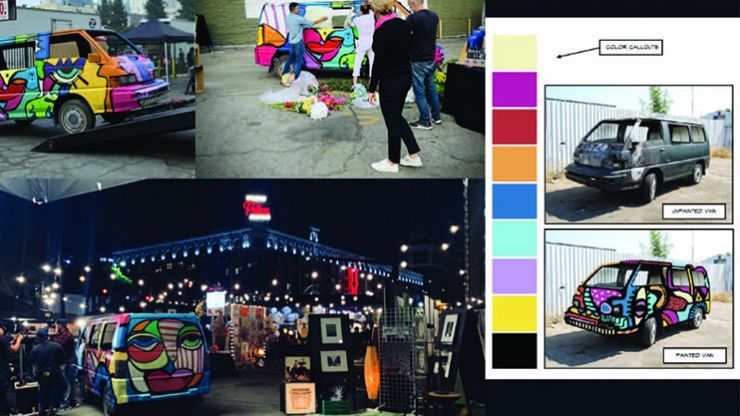 When it’s all said and done, Andrew says that this year will define his career. This set, erected and filmed on location on Market Street, captured a rare moment in time. The neighborhood is changing so much, the street will be a different region entirely in five or ten years. “The fact that this show aired at the same moment when people were waking up to the generational struggle of Black folks and people of color…” Andrew pauses, “it all speaks to just how special this experience was.”

“I hope,” he says, “that this is the future of ethical film-making.” He’s not as excited, more reflective. He might have said that it’s only television, but it’s apparent that it’s so much more than just stories on screen. “We cannot work just for ourselves anymore. It must be with the intention to help better our world.” 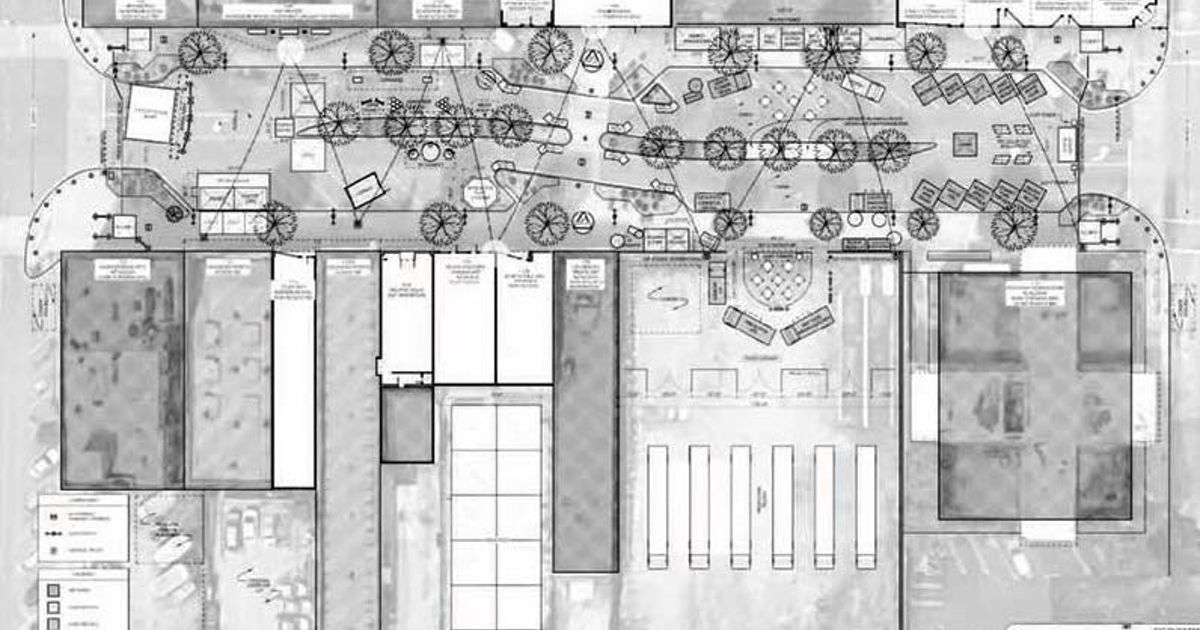 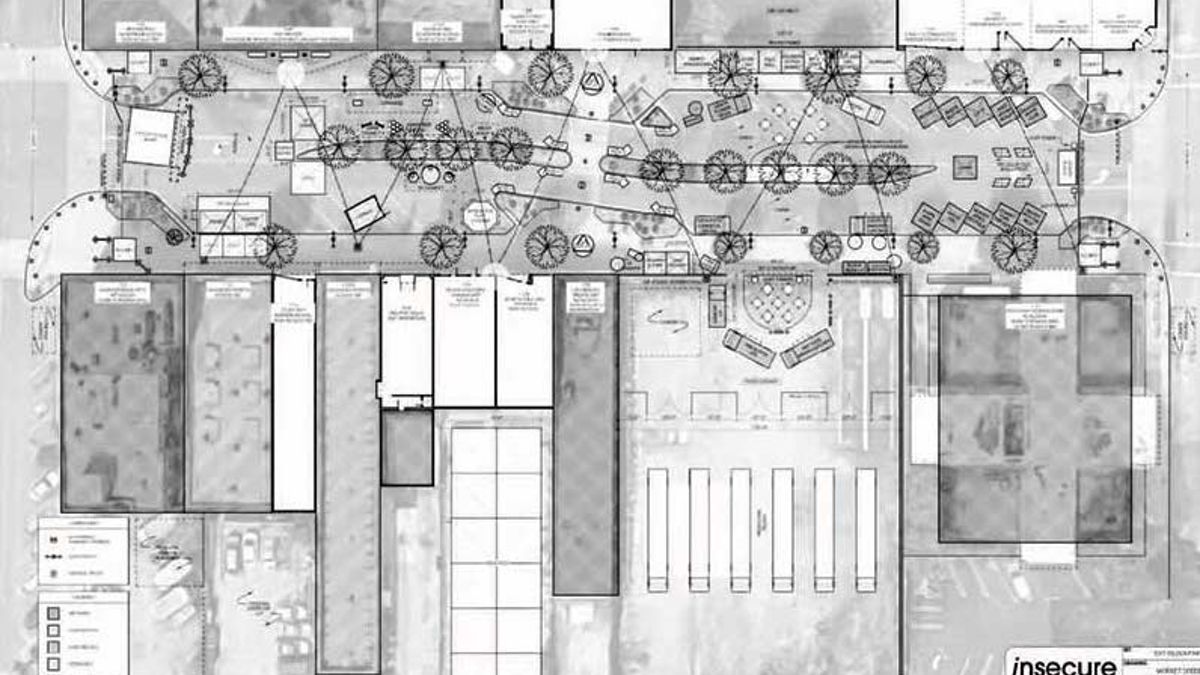