Beyond virtual: the rise of technology empaths

Colette Crespin, director of virtual experiences at the Burning Man Project, tells us how harnessing empathy and maintaining the human connection is vital to our digital future.

The virtual realm is a paradigm often explored and considered as something ‘new’ and ‘exciting’.

Truth is, it goes way back. And forward, and everything in between. It’s non-linear, unbound by time and space. Abstract, yet tangible at the same time.

VR as we recognise it today started in the 1980s. Jaron Lanier, founder of VPL research, began to develop the goggles and gloves as he engineered a way for his audience to access his experience that he called virtual reality.

Rewinding even further, the history of VR can be traced as far back as 1956, when Morton Heilig created the Sensorama. Heilig wanted to see how he could make people feel like they were actually in the movie rather than just being a passive consumer of the Hollywood screen.

Fast-forward to this month when Facebook CEO, Mark Zuckerberg announced his desire for us all to live in a ‘metaverse’, a term now having its moment which was coined in Snow Crash, Neal Stephenson’s 1992 sci-fi novel. The term refers to a convergence of physical, augmented and virtual reality, shared in an online space.

[Has] the impact of Covid-19 simply accelerated a trajectory we were already on?

So, as we literally move together through time and space we can safely say that we are on the cusp of the fifth industrial revolution. An era in which the most recent innovations — artificial intelligence, the Internet of Things (IoT), augmented and virtual reality, 3D printing, and robotics — are being examined for their potential impact on people, on the planet, and how we entertain audiences or create new forms of content.

I have been asking myself over the past six months whether the impact of Covid-19 simply accelerated a trajectory we were already on, and how the changes are going to impact us over the next 10-to-20 years? Will we look back in a century’s time, from our self-driving cars, via our multitude of screens (think Fifth Element-meets-Barbarella) and remember human interaction as being that thing our grandparents did?

After listening to the likes of Tristan Harris (President of the Center for Humane Technology), will these new realms really keep us connected in an authentic way or just become another way to commoditize what it means to be human? Can we really be socially intimate online? If so, who’s doing it well, and what’s around the corner for virtual experiences as we dance in and out of more global lockdowns? 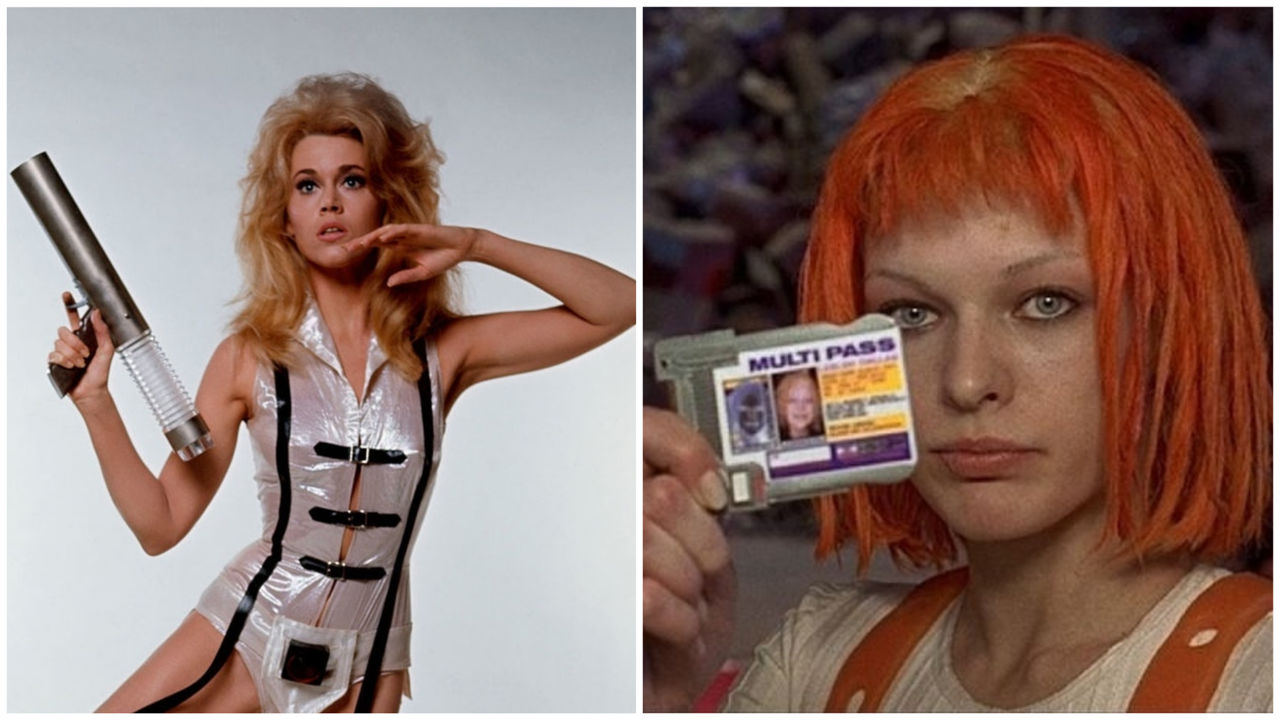 Above: Are we heading for a Fifth Element-meets-Barbarella future?

Simply transferring an in-person experience online doesn’t cut it. Think back to the turn of the millennium, when we pivoted from TV advertising to online. To when we were all making ‘virals’, and music videos started to get filmed on people’s mobiles. It was arrogant of us to think that, as a pandemic hit, we could just pivot in-person social gatherings to online experiences and for them to have the same impact that they had in the flesh.

We have become incredibly complex since the turn of the century, with shorter attention spans, multi-screen habits and simultaneous stimulus. The whole nature of online interaction is different so, to ensure maximum engagement, impact, and positive interaction, a new concept or vision needs to be considered.

A great example of a well-positioned entity that’s at the forefront of experiential technologies and which pivoted from in-person to online, is Burning Man. The annual art and cultural event, held since 1986, is based on 10 Principles, such as Radical Self-reliance, Civic Responsibility, Communal Effort, and Leaving No Trace, practices which positively guide the Burning Man community toward becoming better global citizens.

It was arrogant of us to think that, as a pandemic hit, we could just pivot in-person social gatherings to online experiences and for them to have the same impact that they had in the flesh.

When the pandemic hit, the Burning Man event in Black Rock City was postponed for the first time in its history. This was a real turning moment to examine what it means to gather and co-create in other ways; specifically online.

Even though the move to build a Virtual Burn was justifiably reactive, the organizers did two things right; they did not try to replicate the physical event, and they collaborated with independent technologists who selected solutions that could best communicate the shared ethos of a 1M+ community.

A culturally aligned milestone for the organisation, Burning Man continues to remain at the helm of innovation and interactive art. The exploration and embracement of the internet has allowed the community to lean into the uniqueness of this platform, creating experiences that are truly compelling. 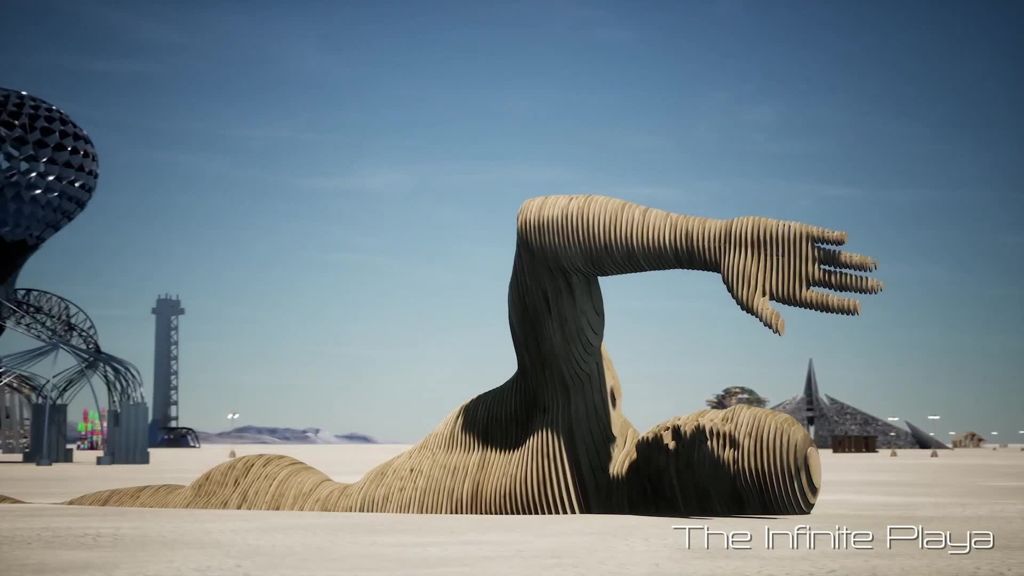 "One big mistake that we see happening is the tendency for brands and people to try to use digital tools to directly simulate live experiences," said John Robson, Co-Founder and Partner of (Creative Technology Agency) CTHDRL.

In the case of Burning Man Project, a decentralised and empowered approach was taken to produce aligned and licenced - yet independent - Virtual Burn events.  Captivating technology like volumetric 3D video brings performers to life, game engines create scale models of the iconic art, and avatars bring participants together in shared spaces.

The virtual space is still ... trying to figure out the magic combination to make online events viable, sustainable and revenue-generating.

The success of these events is that the focus has all been centred around the design, the content and really understanding the audiences and what they desire, proving that technology can succeed as a social touchpoint for quality engagement as well as a business enterprise. As a result of balancing the technology and content successfully, Virtual Burn is now heading into its second year and may well play a permanent role in the future of community-created virtual Burning Man events.

But, like most new concepts, the virtual space is still in its infancy, still trying to figure out the magic combination to make online events viable, sustainable and revenue-generating.

Amidst all of the technology, what we are seeing come through consistently is the craving for connection. As a result of the pandemic, people were looking for ways to feel close to other people; a primal craving to interact and share experiences.

In 2019, the Virtual Human Interaction Lab at Stanford University did a study to see if a workshop conducted with VR engagement could simulate the same level of empathy, social integrity and intimacy as an in-person workshop. Results were positive, with 90% of participants stating that they felt more engaged, empathically enhanced, and experienced powerful emotional responses.

As a result of the pandemic, people were looking for ways to feel close to other people.

Director Chris Milk gave a 2015 TED Talk about how virtual reality can become the ultimate empathy machine and, in 2020, Michael Ronen, Founder of Wonderland Immersive Design, spent the year in lockdown examining digital intimacy and our curiosity to tap into authentic ways of being.

Ronen talks about empathy being core of our human operating system and that we are now in a place and time where it is necessary to evolve more than ever before. He also talks about considering ourselves as a form of ‘human technology’, and evolving from a biosphere into the noosphere (a cyberspace of higher consciousness as a transmutation of elements).

“In the past, the internet created masks,” he says. “Suddenly we gained the power to adopt a multi-level persona whilst simultaneously erecting barriers to our engagement. Today we are looking at how to remove those masks and break down those barriers to curate more powerful inner engagement, empathy and more authentic connection online than ever before.” 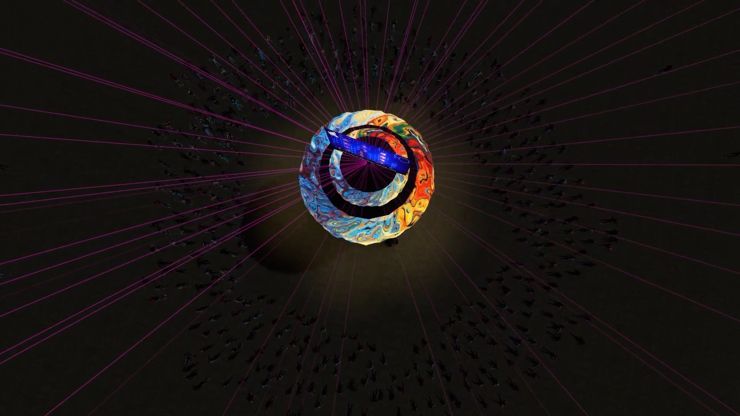 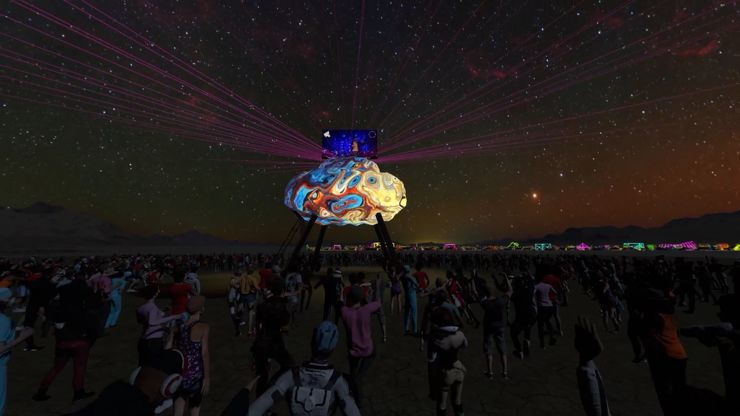 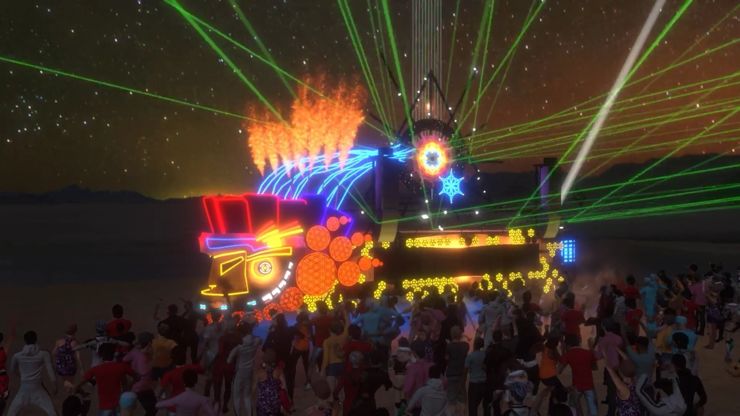 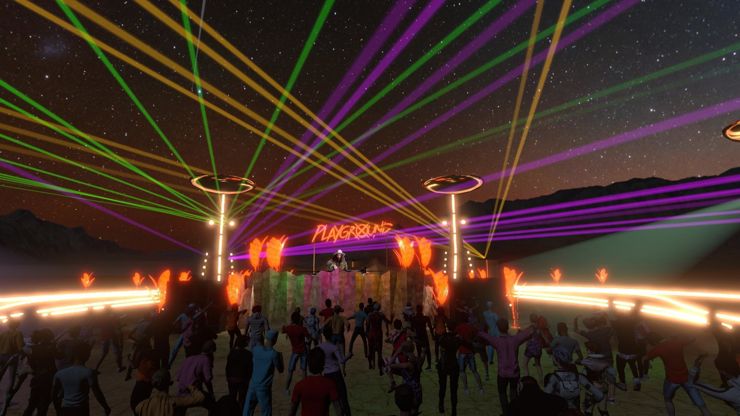 So, what does this all mean? Well, we don’t really know what the future holds, especially at the moment. One thing is for sure; things are changing and, as the Greek philosopher Heraclitus said, “Change is the only constant.”

Commerce is evolving, engagement is repositioning and, as a response to this, perhaps commercial interests in the next few years will wilt away as the key drivers to engagement become more empath-based. As we witness the rise of Gen Z and the cultural ripples from the Covid-19 pandemic, maybe people will seek out new experiences and a new way of being.

As the Greek philosopher Heraclitus said, “Change is the only constant.”

When it comes to Virtual Burn, what is exciting is that it’s been established through co-creation, collaboration and decentralisation and, as we have become more and more isolated in our own streams of consciousness online due to the pandemic, this has really allowed people to come back together to create in a communal way from the comfort of their own living rooms.

The next 18 months are likely to see more pandemic lockdowns. As we re-navigate our social interactions, hybridism is here to stay.

The questions to ask ourselves are less about if and more about how. 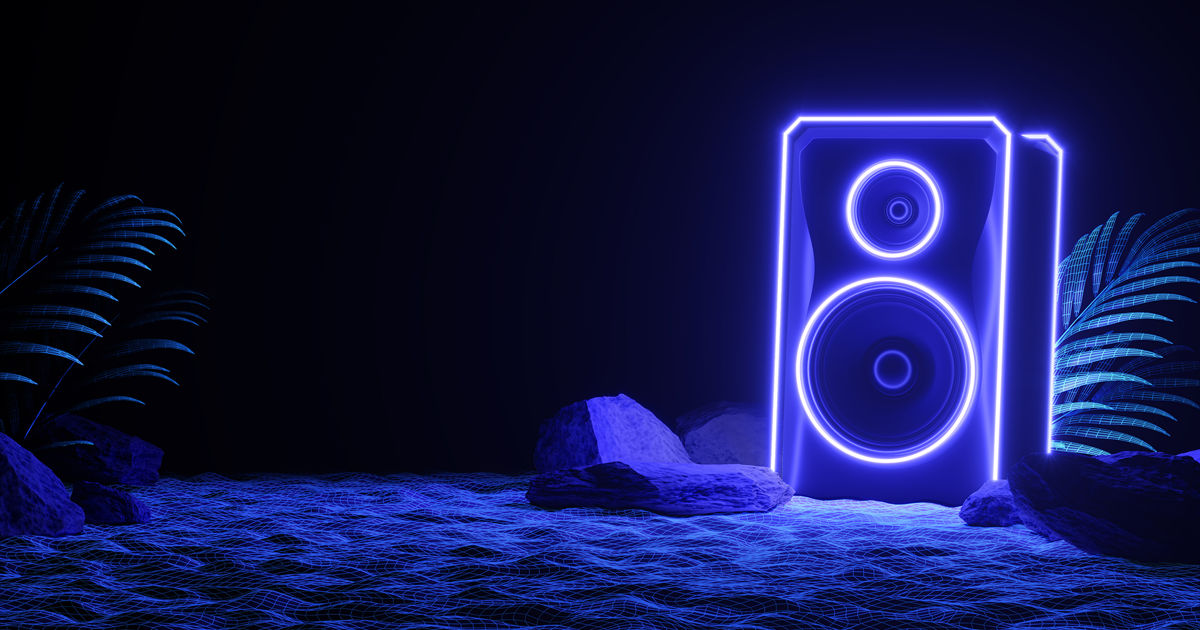 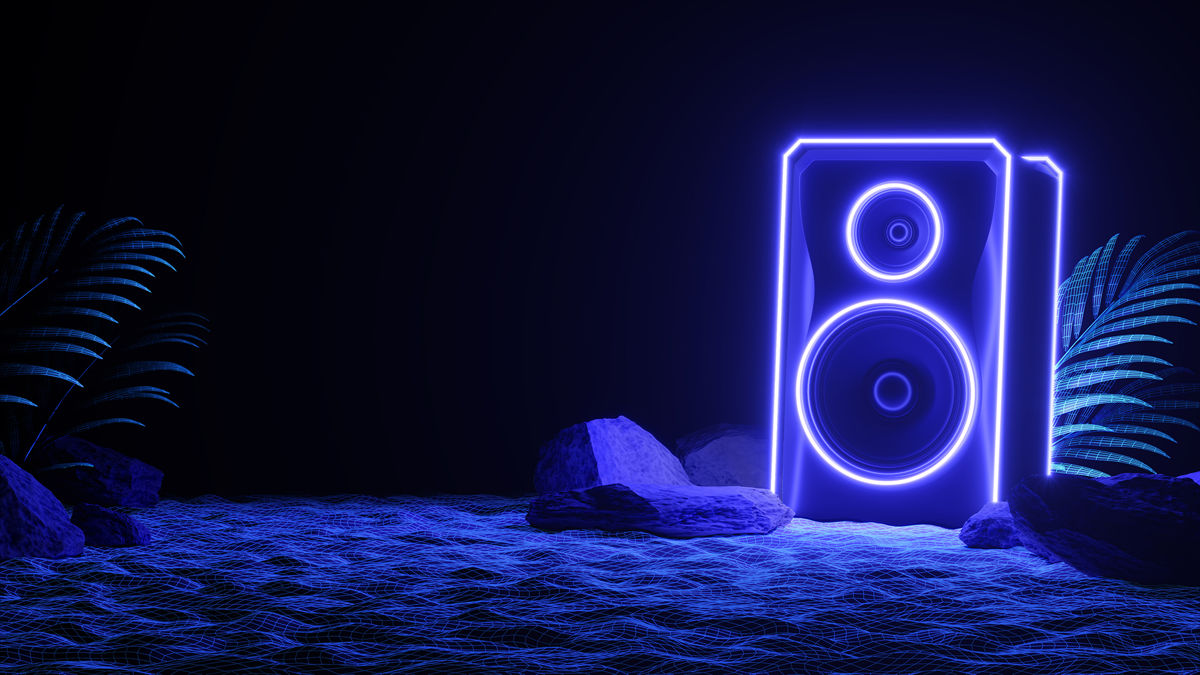