The future of film is just a click away

When it comes to the world’s most popular filming destination, the Canary Islands are up at the top, with its extraordinary array of landscapes, all within easy reach – from deserts, mountains and volcanoes to forests, beaches, and cities.

Looking for a Martian landscape? You’ll find it. The likes of Allied, Blackwood, Paradise Hills, Star Wars, Fast & Furious and Rambo V were all shot here. Back in the day, when producers wanted to recreate planet Earth – with added Raquel Welch – in the time of the dinosaurs for One Million Years BC, they came to the Canaries

Looking for a Martian landscape? You’ll find it here.

It’s not only the incredibly varied landscapes that bring directors, DoPs and their crew to this eight-island archipelago 60 miles off the Moroccan coast, but the climate, too – ranging from 23C in summer to 19C in winter, and with more daylight hours to play with than almost anywhere else.

And then there’s the bottom line of its financial incentives for film productions; up to 54 per cent of the budget. Seamless digital connectivity is going to be crucial when it comes to the future of filming. Since the Covid-19 lockdown that put the breaks on film of all kinds across the world, and cut a huge source of income for the Canaries from millions to zero, the archipelago’s government through PROEXCA and the Canary Islands Film Commission, together with the Audiovisual Cluster of the Canary Islands, is promoting the feasibility and desirability of remote shooting on the Canary Islands.

Seamless digital connectivity is going to be crucial when it comes to the future of filming.

Together, with the Canary Islands Production Service Company Macaronesia Films, they approached the Madrid based production company Kiss and Ride and London-based director Eduardo Vieitez and creator of sustainability-focused App Creast, to make a short campaign film via streaming to promote remote shooting in the islands. Not only shooting, but pre- and post-production, too, from lighting and set design to final cut.

It was a two-day shooting session, in Gran Canaria, across the islands’ national parks with their striking and varied landscapes, and with a small local crew, and a silent legion of more than 1,000 producers, brand controllers and agencies watching it unfold live via YouTube. Vieitez directed with his DoP in London, with the executive producer watching from Madrid, and the sound design overseen from Brazil. Everyone, including the onlookers, shared the same screens. And everyone was left more than impressed because it showed not only a way to pick up filming again as the pandemic continues to stifle productions worldwide, but it revealed, too, a very different future where location costs are 40 per cent lower, the shoot 50 per cent faster, and perhaps most important of all, the bovver-boot of a shoot’s carbon footprint reduced by a staggering 80 per cent. 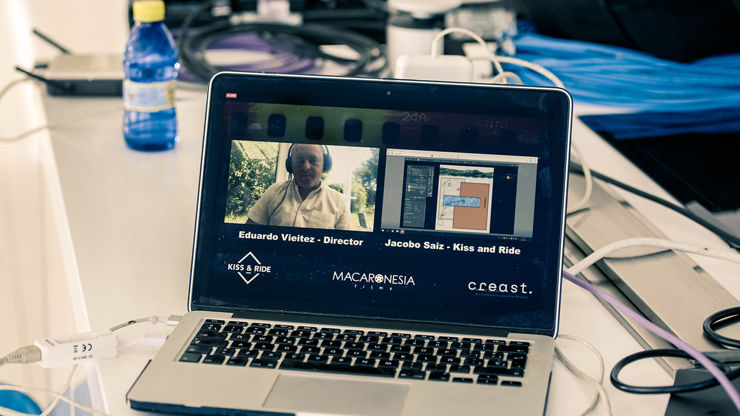 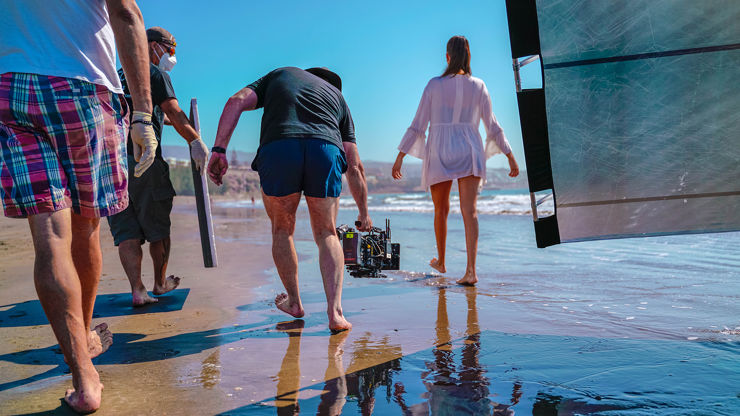 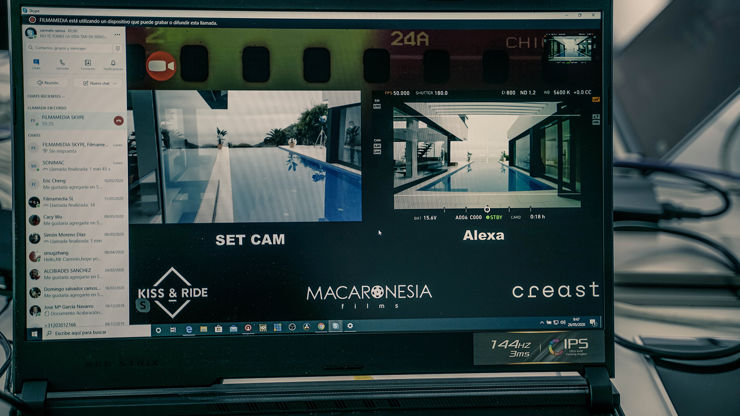 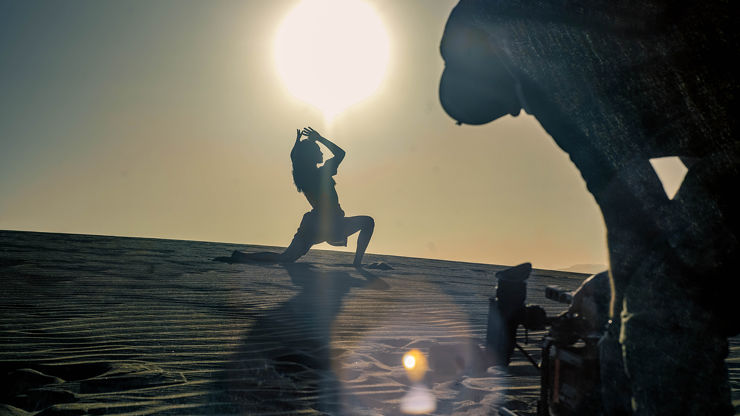 Above: Behind the scenes pictures of Eduardo Vieitez and crew 'on set'.

“We’d measured the carbon footprint of the traditional shooting plan,” says Vieitez, “and we compared it to the carbon footprint that was left behind after the remote shoot, and we discovered we reduced 80 per cent of emissions by using local crew for shoots and managing the essential equipment, and with everyone else working from home.”

He says it was a challenge, going in. “I’ve been shooting for 20 years, and I’d never shot remotely before, but once you overcome the anxieties of a new process, it’s quite comfortable. Everything worked properly. The connection, especially with 5G coming in, is really strong and safe – and we pushed the system to the maximum on this shoot, using drones, shooting underwater, going to remote parts of the island. Everything worked perfectly.”

I’ve been shooting for 20 years, and I’d never shot remotely before, but once you overcome the anxieties of a new process, it’s quite comfortable.

Jacabo Saiz, EP at Madrid-based production house Kiss and Ride, says: “The Canaries has a 54 per cent tax rebate for film productions, one of the best rebates in the world. Which is why the film industry has grown really fast in the Canaries,” he adds. “That audiovisual industrial revolution in the archipelago allowed us to film in a confined situation from Madrid with a local population stuffed with production expertise and all the hardware you could hope for to hand.” And with the imminent arrival of 5G, the future of shooting looks remote, and it’s just a click away.

Since that first remote shoot in June 2020, it has become the new normal in the Canaries. “We had 1,000 clients watching,” says Jacabo Saiz, “and since then, 95 per cent of those clients, a mix of advertising and feature film, now use this remote technology for part of their shoots.” 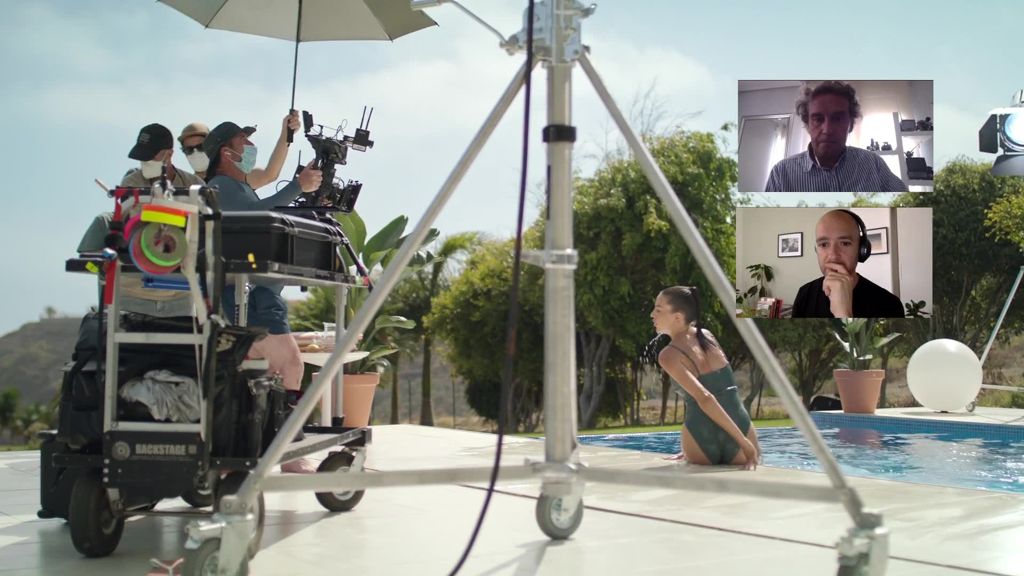 Macaronesia’s CEO Jaime Romero agrees. “Streaming technology for shooting has been a revolution for us. Why? Because you connect to the client and the agency from the Canaries to their office. You don’t need to move all the people you used to have to move. It’s a way of saving money – no flights, no  hotels – while keeping the client, agency and your team connected remotely.”

You don’t have to send four people to a shoot, maybe you send just one. It saves money, it’s more ecological, and it’s much more comfortable as a way to work.

And it’s not something that’s going to retreat with the tide, the way current pandemic restrictions hopefully will. “What I think will happen,” says Romero, “is that we will always have streaming technology, to let not only the people who are on location but also the clients, the people outside the agency,  see what is going on with a shoot. Streaming assist will embed itself. It’s how we’re working right now. It adds value to the production. You don’t have to send four people to a shoot, maybe you send just one. It saves money, it’s more ecological, and it’s much more comfortable as a way to work.”

As we speak, he’s preparing for three international commercial shoots, and starting a movie shoot next week on top of the seven already remotely in production. “That shows how the sector is moving on in the Canaries,” he says. 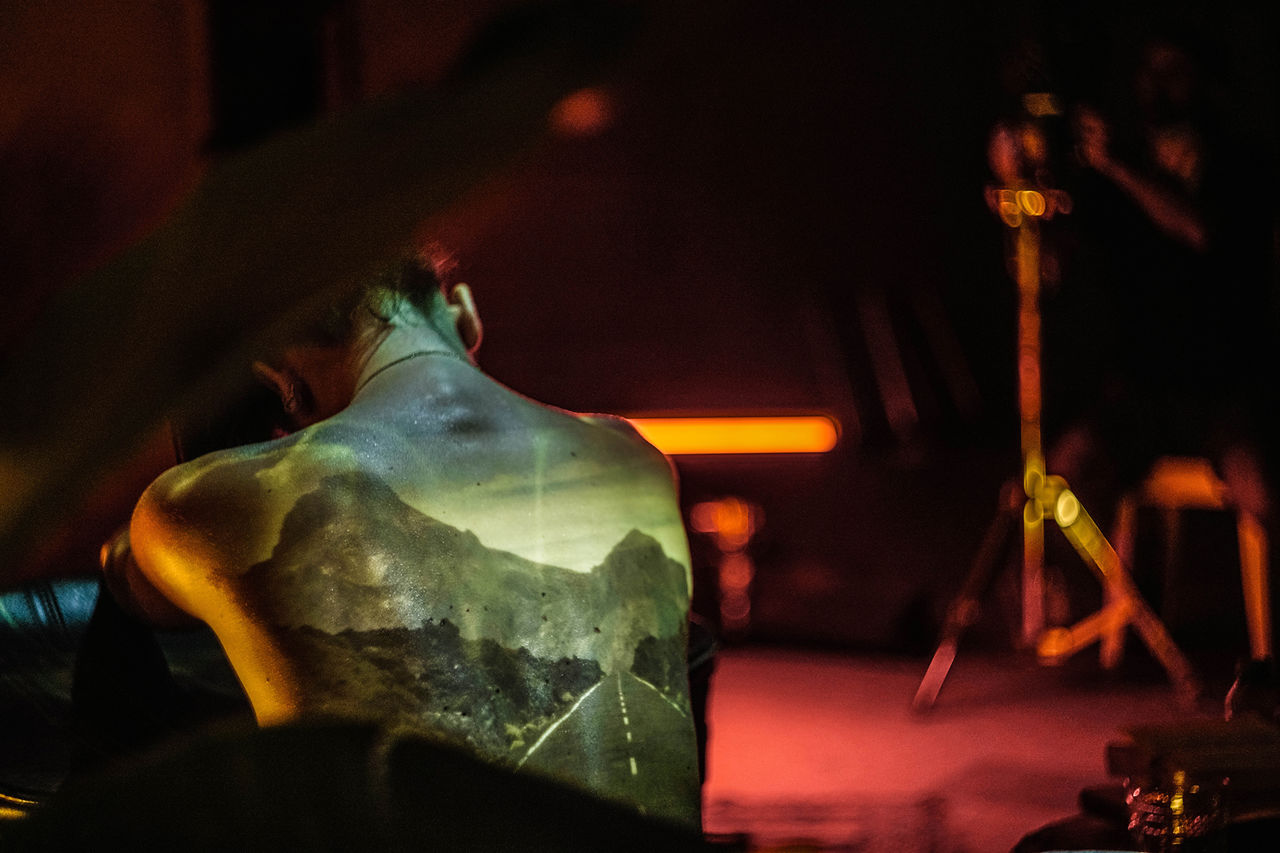 As a director used to being on set, Eduardo Vieitez emphasises that “the big difference between this and traditional shooting is preparing everything really, really well. It was a long process of pre-production, because you don’t have the chemistry that you build with being with the rest of the crew. So you need to work on that, and you need to prepare everything because during remote shooting you have no chance of improvising, otherwise you can quickly end up in a mess.”

A single regular commercial shoot leaves behind a carbon footprint equal to a whole American family for an entire year. That’s too much.

Once the shoot is underway, “It’s important to have a few cameras for reference,” says Vieitez, “The first time we did it, we had one crew member with a tablet showing us whatever we wanted to see, getting closer to the props, in order to move them, to do whatever was required. That’s really important, and now they have a much more sophisticated system, using 360-degree cameras so you can move around the set on your own.” And with an app that turns your phone into a walkie-talkie, instant on-set communication is assured.

While it’s going to take time for people in the industry to adapt to remote, says Vieitez, it is the future. “It’s a really important tool to make the industry sustainable,” he says. “A single regular commercial shoot leaves behind a carbon footprint equal to a whole American family for an entire year. That’s too much. It’s really important creatively, too. When I finished shooting in the Canaries, I could open another internet connection and be shooting in Australia. That’s something we need to explore. It’s something we’ll use massively, and it’s working really well and its cheaper and it’s quicker.

"Companies are really itching to get back to shooting, and this technology will increase in importance because it’s cost-effective, and important ecologically.”

This was a sponsored advertorial for the Canary Islands Film Commission.