Stay classy! Why we need to unpack adland’s beef with common people

The power of voice has been a hot topic in advertising circles of late. But, in Amy Kean's latest column, there're no Alexas or Cortanas involved, just old fashioned class bias, the deification of gravitas, and a plea to listen without prejudice.

Circumlocution. The deceptive art of saying much, without saying anything at all. Look up ‘circumlocution’ in the dictionary and you’ll find screengrabs of a London-based creative agency’s creds.

A senior chap I once worked with at a digital agency was known for his circumlocution. Despite being in his mid-40s he regularly slipped into conversation that he had an English degree from a redbrick university, as if this somehow set him apart from all the other dudes talking nonsense and promoting tweets all day.

He turned out to be useless at everything apart from talking.

But this guy’s circumlocution was on point, especially if you needed him to answer an important question, like: Would anyone be getting a pay rise? or: Why did Susan suddenly take three weeks off work? While he never gave a direct response, the stretched metaphors and manic wordplay would bedazzle and confuse bewildered middle managers almost as much as the gleaming signet ring on his little finger.

He turned out to be useless at everything apart from talking. But with an accent as plummy as Hugh Grant’s it didn’t matter what he said because he had the air, the confidence and the voice of a leader. He had gravitas, the gift of the gab. He was a leader because he felt like one, and was no doubt 100% approved as soon as the job interview’s small talk ceremony commenced. 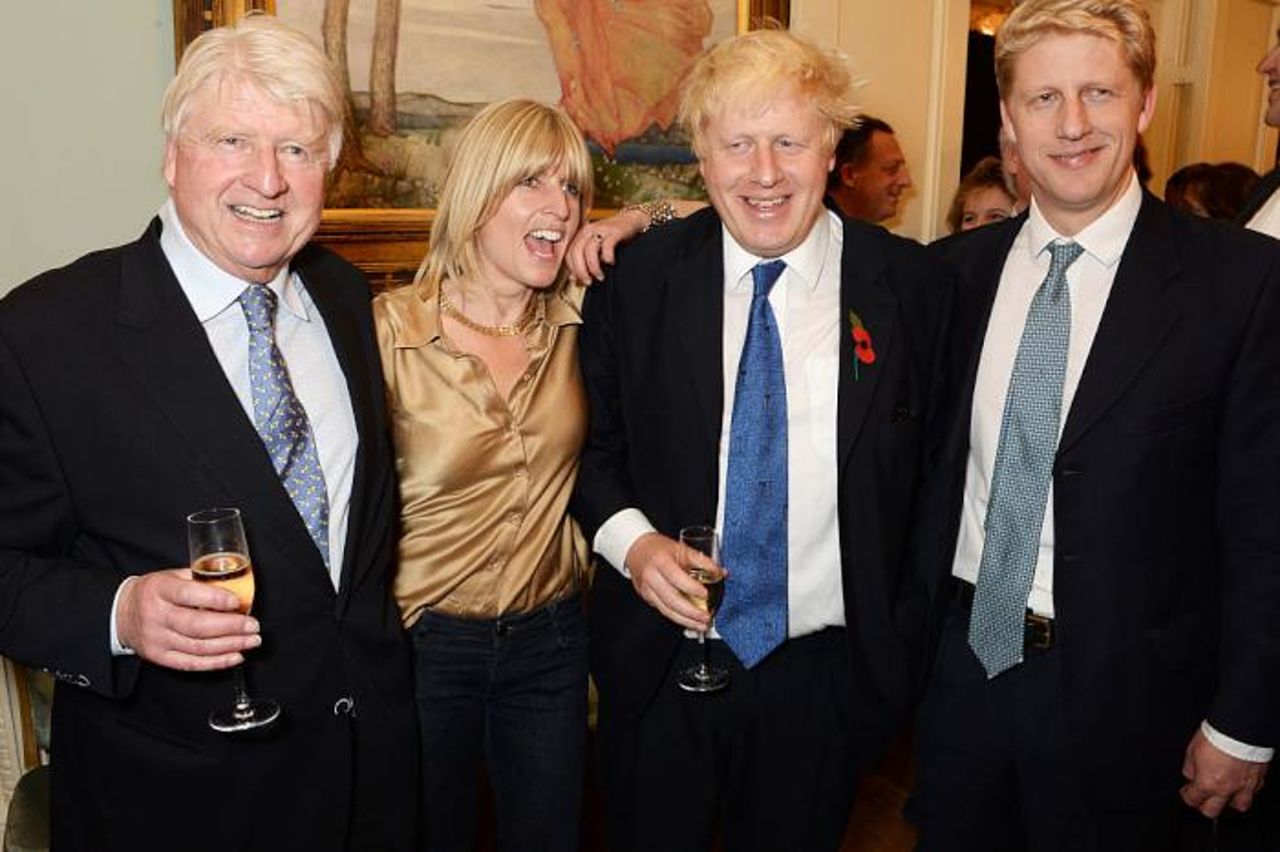 It’s like Britain. Well, England. Despite Boris Johnson’s ongoing foibles, his Eton education and love of reciting (incorrect) Latin continue to work wonders for the country’s perception of him. If you look at YouGov’s dashboard of public opinion on Johnson (please do, it’s fascinating) you’ll discover the positive trait he scores highest on is strength. In the absence of any real prime ministerial track record, his Queen’s English accent and playful turn of phrase is a shortcut to gravitas. He sounds strong.

In the absence of any real prime ministerial track record, his Queen’s English accent and playful turn of phrase is a shortcut to gravitas.

And while ‘voice’ has been named a key creative technology trend for the last few years (don’t get me started on how silly that is) the power - or lack of - in voices in adland is as old as drinking whiskey at 11am in a sharp, beige suit. It’s a pronounced and approved form of active discrimination. Dave Trott told me that after a presentation he once gave, a senior female client said to him: "We like what you say Dave, but do have to do the whole "corblimey guv'nor" cockney barrow-boy act?” 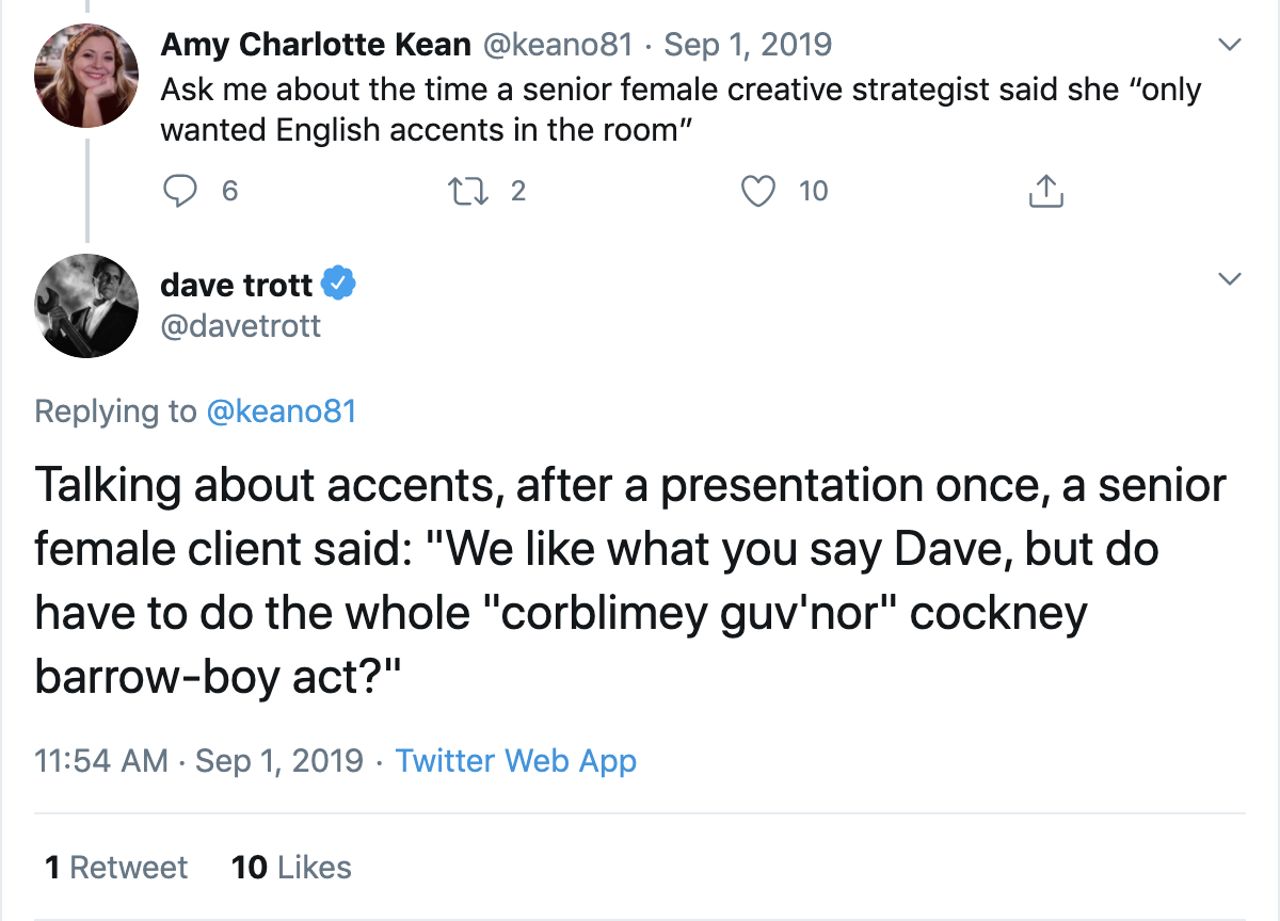 My own fondest memory of such rudeness is when I first graduated, and a recruiter told me my accent was too common for media sales. Oooof. But even last year I bore witness to a woman from a London-based creative agency announcing to a packed room that she wanted “the English sounding man” on her pitch team, rather than his French female colleague. The same woman also covered her ears whenever I spoke, much to everyone in the vicinity’s discomfort.

It was no coincidence this woman sounded like Margaret fucking Thatcher. Thatcher is one of the most famous women to turn to vocal training and elocution lessons so as to be taken seriously. It’s common knowledge that over time she reduced her pitchy femininity to sound more husky, more male, because it gave her gravitas.

In adland, we love gravitas. Reach Solutions’ 2020 study, The Aspiration Window, revealed that advertising and marketing workers are almost twice as driven by power than the average social grade AB. They’re also significantly more likely to focus on material possessions (47% vs. 27%). So, it makes sense that one’s class and the way one speaks has become one of the primary ways in which we group, segregate and judge.

In adland, we love gravitas... So, it makes sense that one’s class and the way one speaks has become one of the primary ways in which we group, segregate and judge.

But, for as long as social class remains out of the UK Equality Act’s Protected Characteristics list (unlike gender, race, sexuality and disability), the lines are blurry and the conversations about it quiet.  Lisa Thompson, in her essay for the IPA entitled The Elephant in the Diversity Room - Social Class, tells us that according to the Labour Force Survey, only 15% of the ad industry come from working-class origins, compared with 30% of the UK workforce.

She speaks of an inherent and counter-productive bias towards individuals from well-off backgrounds and public schools. Thompson wants acknowledgment and change, and states: “a shift to looking at diversity through the lens of thinking differently enables us to unlock a real challenge with the industry; we are an industry where we all think the same.” Above: Fiona Hill, a former US Security Official, spoke of the potential damage her north-east English accent would have done to her career.

A workforce with socio-economic tunnel vision too often makes patronising creative. In Working-Class Cast: Images of the Working Class in Advertising (2012), the authors Erika L. Paulson and Thomas C. O’Guinn believe “advertising is a political instrument” to reinforce class stereotypes and divides. Big brand TV advertising enjoys painting an inaccurate picture of the working class, an almost nostalgic view that is no longer realistic (like most adverts that have ever been made for bread).

My hunch is there’s a direct correlation between the ad industry’s almost psychotic desire for power, as outlined in The Aspiration Window, and its reluctance to make ‘outsiders’ who speak, look and behave differently feel like they belong. Belonging is key. There is power in numbers but, more specifically, in numbers of people who are exactly the same, with the same worldview, the same experiences and, yes, the same voices.

My hunch is there’s a direct correlation between the ad industry’s almost psychotic desire for power and its reluctance to make ‘outsiders’ who speak, look and behave differently feel like they belong.

When I talk publicly about class discrimination (or any kind of bias) I’m sometimes met with the response: “yeah, but it’s a country-wide problem” or “yeah, but it happens everywhere.” Indeed, Fiona Hill, a US Security Official, has spoken of the potential damage her north-east English accent would have done to her career, had she stayed in the UK. But what does it matter that the problem is everywhere? The stats clearly show the situation is worse in our industry. And do we not consider ourselves thought-leaders? Gamer-changers? Rule-breakers? Revolutionaries?

I don’t even know what my real accent is anymore. When I travel home to Essex, as I did last weekend, my friends tell me I speak posh. In my first year at the University of Bath (obligatory higher education reference) I trained the TOWIE twang out of my oral expression immediately. Yet when sat in a boardroom, I’ve been mocked for my common squeakiness. It’s been said I sound like a chimney sweep from Mary Poppins. Occasionally, in meetings, my voice is invisible, and, of course, I’ve been shushed by Boris Johnsons, several times.

I trained the TOWIE twang out of my oral expression immediately. Yet when sat in a boardroom, I’ve been mocked for my common squeakiness.

The voice of mine I like most is the genderless, ageless, classless one that’s written down, because this is the voice that’s listened to. My speech has forever been a source of paranoia and self-awareness. This is my issue. But I’d imagine I’m not alone.

I will never have the kind of gravitas Margaret Thatcher had, or that terrible prejudiced woman from a London-based creative agency who wanted only English-sounding men in the room. Many of us won’t. But that’s what makes us powerful. Maybe if the others join forces, we might just fix adland once and for all, for the common good. 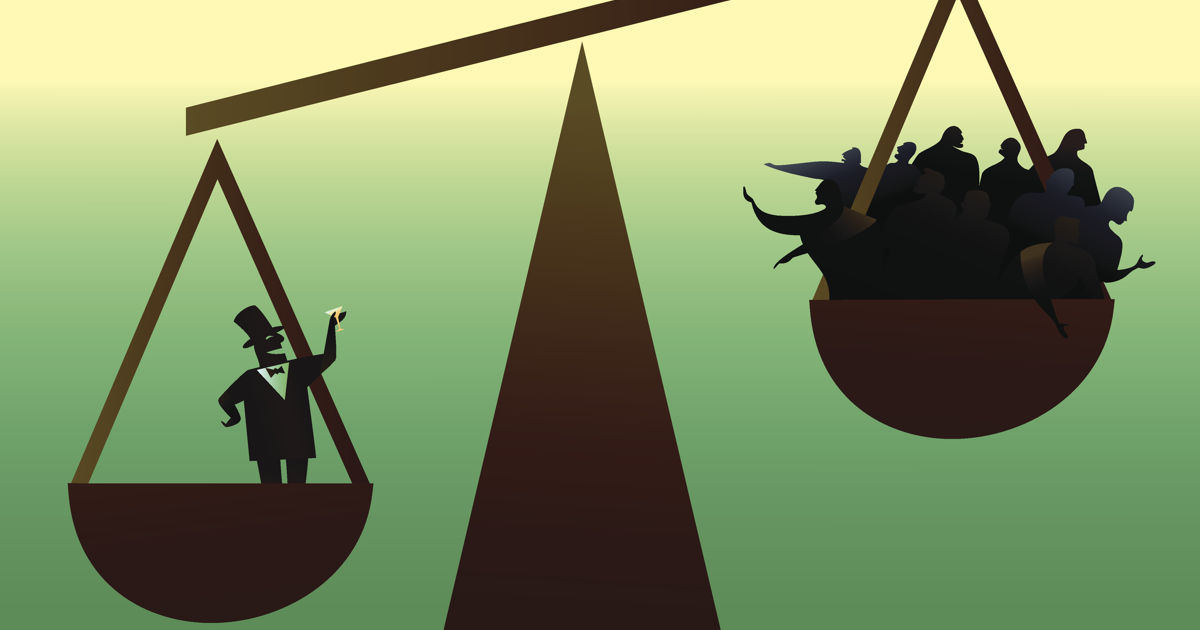